Part of Madison's Historic Past

In the heart of Madison since 1856

The McDonnell-Pierce house was the first residence on “Big Bug Hill,” Victorian Madison’s most elegant neighborhood. The hotel at 424 N. Pinckney St. is one of the four historic mansions still standing at the North Pinckney-East Gilman intersection in downtown Madison, on the ridge along Lake Mendota.

In 1857, Alexander A. McDonnell bought a small woodlot on one of the most prominent hills in Madison, the town was nearly twenty years old by that point, and the fledgling state of Wisconsin was experiencing such a boom that the old Capitol building had been outgrown. McDonnell was the contractor for a new Capitol building and the woodlot he selected on what was known as Big Bug Hill was a short walk from the construction site. McDonnell hired the architect August Kutzboch, a German émigré who was renowned as one of the premier architects in Madison along with his partner Samuel Donnell, and together the two men built what McDonnell termed “the best house money could buy.” 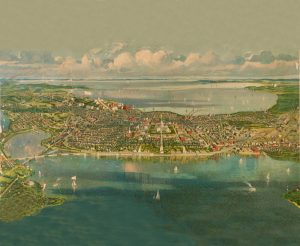 The German Romanesque Revival building, considered by some to be the finest of its type in the country, includes wrought iron from the balconies to buttresses and arched windows.  Inside the 9,000 square foot Madison hotel is a four-story, oval-shaped mahogany spiral staircase leading to a belvedere. Light passes into the marble foyer through etched Venetian glass windows. Originally, there were oil-painted wall designs. The hotel’s days as a single-family residence ended at the turn-of-the-century. It then became a fashionable boarding house run by Carrie Pierce, where some of Madison’s most notable citizens lived.  In the 1930’s, well after boarding houses fell out of favor, the building was converted into apartments, a condition that persisted until 1983, when the Alexander Company purchased the Inn, transforming it into a historic boutique hotel.

For over twenty years, the Mansion Hill Inn lived up to the ideals set forth by Alexander McDonnell, August Kutzboch, and the others that invested so much time, effort, and money into this house. In March 2008, the Mansion Hill Inn was purchased by Trek Bicycle and Trek Hospitality. At that point, Trek embarked on an extensive renovation project that sought to update the hotel’s amenities and preserve the home’s history. Each of the ten charming rooms has been restored, highlighting the property’s historical charm. Trek sought to expand the amenities available by preserving the hotel’s classic parlor and creating a majestic bar for entertaining. The house has been furnished with elegant pieces and state of the art fixtures. Additionally, Trek restored the belvedere at the top of the stairs and some of the ornate wrought-iron on the balconies and front porch among other pieces.

From its origins as a small woodlot on Big Bug Hill to Madison’s finest hotel on Mansion Hill, the sandstone home at 424 North Pinckney Street has emerged as a landmark in both the hospitality industry and the history of the city of Madison.  The elegance, beauty, and history of the home undoubtedly will continue to impress visitors for many years to come.

Help us improve Mansion hill Inn by leaving us comments and suggestions from your stay.